Memorial Candle Tribute From
Vondel Smith Mortuary
"We are honored to provide this Book of Memories to the family."
View full message >>>
In Memory of
Rowena Daniel
Ishmael
1921 - 2013
Menu
Send Flowers 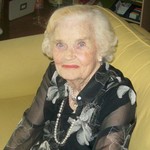 Rowena Daniel Ishmael along with her twin brother, Roland Alexander Daniel, were born August 20, 1921 on their grandparents beautiful farm near Terrell, Texas. She completed a very full life on Wednesday, February 6, 2013 at her home in Oklahoma City at the age of 91. She was the daughter of the late John Thomas (J.T.) and Annette (Lowrie) Daniel. Growing up she had two homes. One in Waurika where her father was a Judge of Jefferson County and one in Oklahoma City while her father was serving in the Oklahoma House of Representatives and was a former Speaker of the House. In Waurika, she was known as Dainty while in Oklahoma City, she was known as Rowena.

She attended Oklahoma City University where she met her future husband, Don Merrill Ishmael. Don and Rowena were married in Dallas, Texas on February 14, 1943 while he was in Dental School. After World War II, they returned to Oklahoma City where she has made her home ever since. She was an active member of Crown Heights Christian Church for over 55 years. She was a member of a Wednesday Mah Jong Club, a Thursday bridge club, Oklahoma County Dental Auxiliary and P.E.O. sisterhood chapter DP.

Rowena and Don would have been married seventy years this Valentines Day. He preceded her in death on August 21, 1998. She was also preceded in death by her beloved parents; her son-in-law, Cameron Faili; her brothers, J. T. “Tom” Daniel, Jr., Ben Lowrie Daniel and Roland Alexander Daniel; and her niece, Carol (Daniel) Armstrong Owen.

Memorials may be made to Crown Heights Christian Church, 4020 N. Western, Oklahoma City, 73118 or the charity of ones choice.

To send flowers to the family or plant a tree in memory of Rowena Daniel Ishmael, please visit our Heartfelt Sympathies Store.