Memorial Candle Tribute From
Vondel Smith Mortuary
"We are honored to provide this Book of Memories to the family."
View full message >>>
In Memory of
Richard Lee
Zahourek
1929 - 2013
Menu
Send Flowers 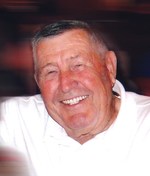 
Richard Lee Zahourek went to be with the Lord on Tuesday, March 19, 2013 at the age of 83. He was born April 19, 1929 in Oklahoma City to his parents, Charles Wesley and Ophelia Corine (Singletary) Zahourek. A lifelong resident of south Oklahoma City, Richard was a 3rd generation 89’er of Bohemian Emigrants who homesteaded near Wheatland, Oklahoma. After graduating from Capitol Hill High School in 1947, Richard honorably served his country in the United States Army during the Korean Conflict. On May 27, 1951 he married Eddie Belle Shanks and they celebrated 49 years together before she passed in 2001. Richard proudly retired from Tinker Air Force Base in 1993 as a highly skilled Pattern Maker of the Tool & Die Division, where he happily turned his hobby and love of wood working into his profession. He attended First Southern Baptist Church. Richard enjoyed fishing and going to his cabins at Lake Texoma and Lake Eufaula. He will be deeply missed by all.


To send flowers to the family or plant a tree in memory of Richard Lee Zahourek, please visit our Heartfelt Sympathies Store.