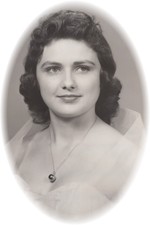 
Elaine went to be with her heavenly Father on July 4, 2013. She was born December 29, 1938 in Ponca City, OK to Howard Bricker Weston and Margie Chrystelle (Spriggs) Weston. She died of complications from Alzheimer's. She married Kenneth Paul Uffen on December 27, 1958 in Chickasha, OK. Elaine was a devoted wife, mother and daughter whose many talents were numerous and greatly appreciated. Raising and spending time with family was her greatest joy. She also enjoyed playing cards and dominos, reading, traveling, sewing, cooking and playing the piano. Elaine was preceded in death by her parents, Howard and Chrystelle Weston, one grandchild Peter Stephen Uffen and her son-in-law Don Boren. Elaine is survived by her husband Kenneth Uffen, son Bryan Scott Uffen of Bellevue, NE., daughter Kristi Dawn Boren of Tuttle OK, son Stephen Paul Uffen and his wife Rhonda Lynn Uffen of Oklahoma City, her sister Mary Ablah of Edmond OK, and cousin Pat Parr of Ponca City OK. Her precious grandchildren, Jason Lee Boren, Sherrie Dawn Boren, Jesse Paul Uffen, Matthew Phillip Uffen, and one great grandchild Kenneth Boren. In lieu of flower, funds can be sent to Mercy Hospice at http://www.mercy.net/service/mercy-health-foundation. Visitation held at the funeral home July 7, 2013 from 12-8 PM. Services will be held 1 PM July 8, 2013 at South Lakes Chapel with burial following at Heritage Burial Park.

To send flowers to the family or plant a tree in memory of Dawn Elaine Uffen (Weston), please visit our Heartfelt Sympathies Store.