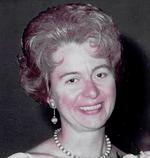 A memorial service will be at the Lynlee Mae Chapel, 507 E Main Street, Moore ,Oklahoma at 7pm Wed Oct 21st.,and service in Black River, New York is pending. She will be interred at the Evans Mills Cemetery in New York .

Ruth M. Washburn Quay was born in 1929, in Philadelphia, New York. She was the daughter of Hazel & Frank Washburn. She passed away on October 16, 2015 at 6 pm, at The Legends, memory care wing, in Oklahoma City, where she has been residing. She is preceded in death by her parents, her stepdad Adolph Stacy, her husband Daniel, sisters in law, Norma & Jane Washburn. She is survived by her brothers, Francis and Fred Washburn, in New York & their children David, Julie, Steven, Richard, JT & their families; her daughter Diana, in OKC; grandson Todd & Amber D’Amico; great grandsons, Roman & Reid; granddaughter, Dawn & Dean Henderson; great grandchildren, Dean, Daniel, Kristina & Rebecca, all of OKC; and her daughter, Susan of New York; grandson Matthew Quay & Jessica; great granddaughter, Lily of Tennessee. Mrs. Quay spent almost her entire life in Black River and graduated Black River High School in 1946. She lettered in basketball with coach Jane Severance who later married her brother Fred. In l947, she married Daniel and was a devoted wife for over 50 years. She was especially good at making apple pies and holiday dinners. She loved having tea in her china tea cups. She and Dan traveled to Hawaii , Europe, Oklahoma & Florida. She cherished moments with family and friends in the summer, at their cottage, at Guffin’s Bay, New York. Boating, swimming, fishing , watching sunsets, hosting family fish fries, birthday gatherings and playing cards kept her busy. She picked wild flowers to always adorn her dining table, but loved the red roses Dan gave her on special occasions. Ruth was a big fan of Dan’s piano and organ playing, the Syracuse Symphony, concerts at Sackets Harbor & Black River Elementary School. Her love of big band music included the late Frank Sacci’s band. She was Dan’s faithful & talented dance partner in the Country Kussins & Cosmopolitan Dance Clubs, a member of the Watertown Golf club, & Kamargo Association, hosting meetings for alumni at their home.
She was a Brownie leader, she sewed many matching outfits for her daughters & faithfully attended their concerts, musicals and parades. She taught them the importance of faith and family and how to cook & bake for loved ones. She taught them to sew, how to keep a tidy house, and to enjoy music & nature. And from Emily Post --the value of good manners, kindness, respect to everyone. She loved the beautiful 2-story home that she and Dan built , but moved to OKC in 2011, under her daughter Diana’s care. She was a member of First Methodist Church, Black River and First Presbyterian Church, Watertown. She was a strong woman of faith, who cared for Daniel and her mom Hazel in their twilight years. Ruth was a retired civil service secretary/payroll clerk of over 20 years at Fort Drum, N. Y. and drove her first car, a dark green Chrysler Newport to work every day. She also had a beauty shop in her home & volunteered to help Seniors with their income taxes. Christmas was her favorite season and often dressed as Mrs. Claus for area banks.
Ruth was 32 year member of the Bethany Chapter of OES. She was the honorable Grand Matron in 1972 and Associate Grand Marshall of the State of New York in 1975. Ruth and Dan were matron & patron of OES and Masons the same year and visited many chapters all over New York State, where they made many lifetime friends. One of their most memorable trips was to NYC to the state convention.
Ruth was a devoted wife, beloved mother, loving grandmother, great grandmother and friend of the community of Black River and will be greatly missed. The family wishes to thank The Black River Ambulance Squad, all friends and good neighbors of Ruth, Bethany Chapter #343 OES and the House of the Good Samaritan Hospital during her last years in New York. Also thanks to the staff of The Legends Assisted Living Facility, Memory Care Wing, the staff at Centennial Hospice and Dr. Lucio, all of OKC, for their compassionate and loving care of Ruth, during her challenging journey with Alzheimer’s.

In lieu of flowers, donations can be made to the Alzheimer’s Association.

To send flowers to the family or plant a tree in memory of Ruth Marie Quay (Washburn), please visit our Heartfelt Sympathies Store.