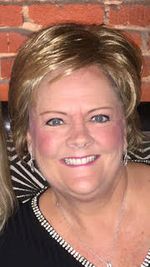 Julie Diane (Akin) Hamilton was born May 10, 1962 in Oklahoma City the daughter of Georgia Diane Richards and Jerry Dale Akin, Sr.. Julie completed this life on Easter Sunday, April 16, 2017 at her home in Oklahoma City at the age of 54.

Julie was raised in Oklahoma City where she graduated from Putnam City North High School in 1980. She married Jason Forrest Hamilton on December 17, 1983.

She was preceded in death by her father, Jerry Akin; her brother, Rich Akin; and her beloved son, Connor Lee “Bubba” Hamilton.

She is survived by her husband of 33 years, Jason; her daughter, April Clare Abeyewardene and her husband Shehan; her mother, Georgia Taylor and her husband Ray; her step-mother, Jeanne Akin; her brother, Jerry Akin, Jr.; her step-sister, Richelle Atkins and her husband Ron; her father and mother-in-law, Robert F. and Mary L. Hamilton; her uncles, Harold Akin and Jack Akin; as well as numerous, cousins, nieces, and nephews.

The family will receive friends from 5:00 until 7:00 p.m., Friday April 21st at Vondel Smith Mortuary North chapel, 13125 N. MacArthur Blvd. Memorial services will be at 9:30 a.m., Saturday April 22nd in the Crossings Community Church sanctuary. Inurnment will be in the Bethany Cemetery following service.

Julie will be deeply missed by all who loved her, but her family and friends rest in the assurance of her victory over death through Christ.


To send flowers to the family or plant a tree in memory of Julie Diane (Akin) Hamilton, please visit our Heartfelt Sympathies Store.