Memorial Candle Tribute From
Vondel Smith Mortuary
"We are honored to provide this Book of Memories to the family."
View full message >>>
In Memory of
Waldo
Young
1932 - 2017
Menu
Send Flowers 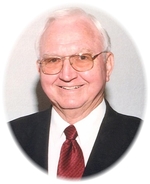 Bro. Young sang high tenor and played the piano for the Ministers Quartet for 43 years with his brother, Homer Young, friends Jack Richey and Delbert Akin. They ministered in at least 25 states with over 200 revival type meetings, and probably over 500 concerts.

The loves of his life were his wife. He married JoAnn when they were nineteen and fifteen. They were truly best friends. He loved music. He could play any instrument with a keyboard. He played and sang with anyone who would play or sing with him. He sang with his brothers and mother when he was a child. His children were taught to play and sing when they could talk and walk. He played and sang the last time three weeks before his death at the nursing home
where he lived the last few months of his life. Today he is singing with his mother, brother
Homer, and Delbert Akin, one of the members of the quartet who passed before him.

To send flowers to the family or plant a tree in memory of Waldo Young, please visit our Heartfelt Sympathies Store.