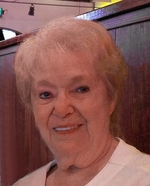 Rowena Fern Ingraham was born October 5, 1933 in Blanchard, Oklahoma to Clyde Jones and Mary (Ramsey) Jones. She left this earth at 84 years of age. Rowena graduated high school in 1951 at Bridgecreek, Oklahoma. She never forgot her roots. She always remembered the families in that community. She retired from AT&T in Oklahoma City, where she worked for over 30 years. She met Virgil Ingraham at AT&T and they married January 20, 1996. Rowena and Virgil were founding members of the Centennial Rodeo Opry. They led very active lives. They held season tickets to the Jewel Box Performances, and other theatrical plays. They were avid “Thunder” fans. They made time for their grandchildren’s activities and were always available whenever someone needed them.


To send flowers to the family or plant a tree in memory of Rowena F. Ingraham, please visit our Heartfelt Sympathies Store.