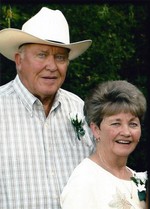 Donal “Don” was born on October 29, 1932 in Porum, Oklahoma to parents Doy and Hattie Mount. He departed this life on March 10, 2018 after having completed his work on this earth where he joined his Lord and Savior in Heaven. He was greeted at the pearly gates by his loving wife, Anna, who had departed just one day before Don.
Don served in the Army during the Korean War and continued in service to his country until being honorably discharged in 1955. Don met and married the love of his life, Anna Faye Dodd, in August, 1955.
Don commenced his business life as an Accountant and was a tax specialist who participated in the business world of finance, raising venture capital and arranging financing for various companies. Don retired from the business of banking in 1994 after having served in that field for more than 40 years.
Don held a number of diplomas, degrees, certificates and recognition of educational accomplishments but the one he was most proud of was the one that stated “Certificate of Ordination”. Don served as a Deacon in his church where he also taught a Sunday School class for mixed older couples. He enjoyed doing this because he always said that this group was well grounded in God’s Word and that resulted in his having to study more. A part of Don’s testimony included a reference to the fact that he had wandered lost for forty years similar to the Children of Israel.
Don was preceded in death by:
Parents, Doy and Hattie Mount
Sister, Wanda Lee Albright
Daughter in Law, Bobbie Jo “Robin” Mount
Wife, Anna Faye Mount


To send flowers to the family or plant a tree in memory of Donal "Don" Mount, please visit our Heartfelt Sympathies Store.