In Memory of
Dorothy Mae
Voyles
1928 - 2018
Click above to light a memorial candle.
Memorial Candle Tribute From
Vondel Smith Mortuary
"We are honored to provide this Book of Memories to the family."
View full message >>>
Send Flowers
Menu 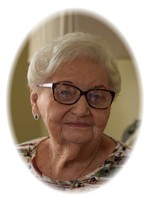 Viewing will be Thursday June 7th from 4-8 PM, with family greeting friends from 6-8 PM at Vondel Smith South (6934 S. Western).


Dorothy went to be with her Lord and Savior on June 4, 2018 at the age of 89. She was born on September 4, 1928 in Fort Cobb, OK to William H. & Mae Turney. She graduated from Fort Cobb H.S. in 1946, and soon after married the love of her life J.R. Voyles on September 15, 1947. Together they shared 57 years of marriage until his passing in 2005. Dorothy enjoyed her career with the Oklahoma State Department of Health as a data processer until her retirement in 1990. Dorothy was a devout member of Knob Hill Baptist Church where her husband was a deacon for many years. Dorothy enjoyed crocheting and doing mission work for the church, but nothing brought more joy to her than the time spent with her family and grandchildren. She will be forever missed by all that knew her.


To send flowers to the family or plant a tree in memory of Dorothy Mae Voyles, please visit our Heartfelt Sympathies Store.