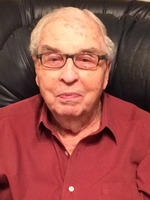 John L. “Jack” Cantrell, beloved gentleman, left this life on Monday, June 11, 2018 in Oklahoma City at the age of 91. He was born December 9, 1926 to, Christopher Columbus and Anna C. (Murray) Cantrell. At the loss of his mother at a young age, he was raised by his father and step-mother, Janice Wesley Cantrell. Jack had four older step-brothers and six step-sisters.

Jack honorably served his country in the United States Army from March, 1945 through December, 1946, serving in Korea as a Duty Non Commissioned Officer with the 770th Railway Operations Batallion, supervising the work and inspection of military railroad passenger coaches of the Korean railroad that was being used by US military personnel.

Jack spent most of his remaining years working for Civil Service Operations at Tinker Air Force Base as a crate carpenter with the Supply & Transportation branch to transport military equipment. Throughout his 36 years of service, he traveled to England, France, Canada & Vietnam, as well as multiple military bases across the US in support of packing and shipment of equipment where needed for military use.

Jack was a devoted husband, father and grandfather and will be dearly missed.

To send flowers to the family or plant a tree in memory of John Lee Cantrell, please visit our Heartfelt Sympathies Store.