In Memory of
Mary Catherine "Gallagher"
Jones (Jones)
1943 - 2018
Click above to light a memorial candle.
Memorial Candle Tribute From
Vondel Smith Mortuary
"We are honored to provide this Book of Memories to the family."
View full message >>>
Send Flowers
Menu 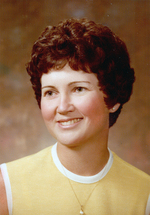 Mary Catherine Gallagher Jones was born June 27, 1943 in Norman, Oklahoma to James and Mary Ann Gallagher. Mary passed on from this life on October 6, 2018, at age 75 in Oklahoma City, Oklahoma, following a long struggle with Alzheimer’s Disease. Mary was educated at St. Joseph’s Catholic School in Norman, Oklahoma, and graduated a member of the Class of ’61 from Norman High School. She left home to attend the University of Central Oklahoma, where she earned a degree in Secondary Education and became a dedicated member of Sigma Sigma Sigma. Following her graduation from college, she worked as a Business teacher in Oklahoma City and Midwest City Public Schools and spent the majority of her professional years teaching English in Moore Public Schools. Mary married David Jones, and together they raised three daughters in Southwest Oklahoma City. Mary was a force – she was fun, funny, inspiring, and motivating. She was a beloved teacher and earned many accolades at her schools, including Teacher of the Year at Brink Junior High. She was a community-builder, a hard-working committee member for various causes, and a devout member of and volunteer at St. James Catholic Church. Mary’s warmth, energy and personality made her an instant hit in any social group. After Mary retired, she took the opportunity to travel as much as she could with her husband, David.

Mary is survived by
her husband, David Jones,
three daughters and sons-in-law: Lynette and Brian Talkington of Tulsa, OK; Carol Jones and Thomas Hynes of Chicago, IL; Rachel and Steve Cerney of Oklahoma City, OK.
Mary is also survived by eight grandchildren—Olivia, Luke, and Lucy Talkington; David, Benjamin, and Anna Hynes; Andrew and Grace Cerney.
In addition, she is survived by her sister and brother-in-law, Nora and Eugene Barnhill of Norman; her many beloved cousins, nieces and nephews; and her cherished friends and neighbors.

To send flowers to the family or plant a tree in memory of Mary Catherine "Gallagher" Jones (Jones), please visit our Heartfelt Sympathies Store.