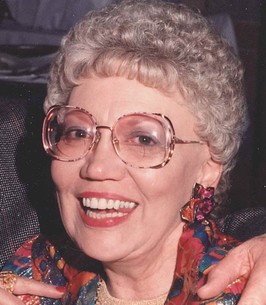 The details of Jo’s life matter less than the impact she had on those friends and family who had the opportunity to know her. Sharp-witted, feisty, opinionated, Jo had a generous spirit and a tendency to speak her mind no matter its effects on its recipients. Raised in a farming background, Jo later worked in the City of Oklahoma City Water Department. Jo knew financial struggles with both husbands until she and Ray found success in Ray’s contracting business, resulting in a more than comfortable life filled with friendships and travel.

Her last few years were burdened with deteriorating health; throughout her struggles, however, she maintained the spirit and humor that characterized her entire life.

Jo was preceded in death by her parents, Virgil and Veda Brannon, her husband Ray, her daughter Vicki, her grandson Zachary Randall, and her son Mike James.

Jo is survived by her son-in-law Mike Randall, her daughter-in-law Thongboo Black, and members of Ray’s family, the Middlebrooks and the Morrisons, as well as her home-care “family”, Ramona Perry, Mavis Hall, and Patsy Webb.

To send flowers to the family of Kathryn Jo Foley, please visit our Heartfelt Sympathies Store.

We encourage you to share any memorable photos or stories about Kathryn. All tributes placed on and purchased through this memorial website will remain on in perpetuity for future generations.

J
I am very sorry for your loss and may you receive much love and comfort to make this hard time more bearable. Also may, "the god of all comfort" (2 Corinthians 1:3,4) be with you during this difficult trial.
Jysmone - Tuesday November 27, 2018 via Condolence Message
Share This:

DF
Jo is a remarkable person and a very special friend. I enjoyed her sense of humor and "call it like she sees it" personality. I already miss her.
David Fuzzell - Thursday November 15, 2018 via Condolence Message
Share This:
1
Page 1 of 1
Share
×