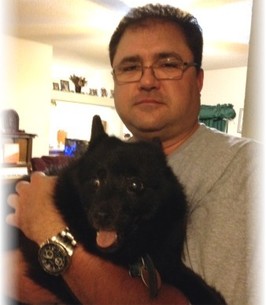 John Terry Knight was born January 5, 1963 in Beeville, Texas to Jesse Van and Elizabeth Ann (McKenzie) Knight. He died Monday November 26, 2018. John was a member of the Southwest Church of Christ and a Mechanical Engineer for Johnson Controls. John had many hobbies; he enjoyed fly fishing, target shooting, ham radios, metal detecting and building and using computers. He was certified as a Professional Engineer and a member of the American Society of Mechanical Engineering.
John was preceded in death by his parents
Survivors include:
• His wife of 30 years Michelle Knight
• Two sons Michael Knight and Brandon Knight
• Brother Ricky and wife Betty Knight
• Sister Sherry Knight
• Mother-in-law Prescilla Pigg
• Brother-in-law Tim and wife Catherine Pigg
• And many nieces and nephews

To send flowers to the family of John Terry Knight, please visit our Heartfelt Sympathies Store.

We encourage you to share any memorable photos or stories about John. All tributes placed on and purchased through this memorial website will remain on in perpetuity for future generations.

Calvin and Kahori Iu and Terry & Tamera sent flowers to the family of John Terry Knight.
Send Flowers
KD
The Norman Modification Center would like to send warm thoughts and prayers to John's family during this difficult time. John was very instrumental in getting this project started and contributed greatly to it's success. John was a good man and is dearly missed by all of us.
Kevin Davis - Wednesday November 20, 2019 via Condolence Message
Share This:
H
I am so sorry for the family’s loss. Death is truly an enemy. May you find comfort from the future promise recorded in 1 Corinthians 15:26 which says “the last enemy, death, is to be brought to nothing.” This is a promise from God’s word the Bible and we can be confident he will fulfill his promises.
Hallee - Monday December 24, 2018 via Condolence Message
Share This:

C
My sincere condolences to this family. Our loving heavenly Father will not forget your dear loved one and he assures us that his life is precious to him. (Psalms 72:12-14).

RF
My deepest sympathy for John’s family, they are in my prayers and thoughts.

Many great memories were made on the trout fishing trips and Saturday mornings on the skeet range.

John will be sorely missed, and may he rest in eternal peace.
Randy Forristall - Friday November 30, 2018 via Condolence Message
Share This:

J
To the family and friends of John Knight, I would just like to express my deepest condolences. May you remember the promise found at Revelation 21:4 where it says he will wipe out every tear from their eyes, and death will be no more." We can be sure that God will fulfill what he promises to do for us.
Jys - Friday November 30, 2018 via Condolence Message
Share This:

Remember that we love and care about you and your family.
Calvin and Kahori Iu - Thursday November 29, 2018 via Heartfelt Sympathies | Order flowers in memory of John
Share This:

KD
John and I have shared an office for the past year. We have been successful in our ventures and I looked forward to continued success for us and our department. My prayers are with his wife and sons in this difficult time. John will be missed.
Kevin Davis - Thursday November 29, 2018 via Condolence Message
Share This:

So very sorry. We are just heart broken. You and your family are in our thoughts and prayers. We love you guys and are here for you.
Terry & Tamera - Thursday November 29, 2018 via Heartfelt Sympathies | Order flowers in memory of John
Share This:

RF
My deepest and sincere condolences to the family and friends of John Knight.
May he rest in eternal peace.
Robin Furlong - Thursday November 29, 2018 via Condolence Message
Share This:
1
Page 1 of 1
Share
×