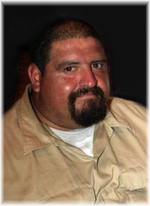 Orlando Garcia, Jr. became one of God’s Heavenly angels on Tuesday, March 5, 2019 at the age of 41. He was born on November 5, 1977 in Seminole, Texas to his parents, Maria O. (Martinez) and Orlando Garcia, Sr. After graduating high school, Orlando began working alongside his father in their family business of commercial and residential metal building construction. In his spare time, Orlando enjoyed many hobbies such as playing and joking with his nieces but nothing was as important to him as spending time with his family and friends. Orlando was a loving son, devoted brother and loyal friend who will be remembered for his beautiful smile and kind heart. He will be deeply missed.

He was preceded in death by his:
Father, Orlando Garcia, Sr.