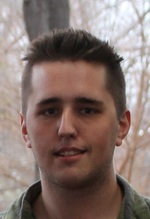 Matthew Adam Buehler was born August 9, 1991 in San Diego, CA the son of Keith Joseph and Mary Faith (Appelquist) Buehler. He completed this life on Thursday, September 5, 2019 at the age of 28.

Matt was raised in Oklahoma City where he graduated valedictorian from Putnam City North in 2009. He went on to graduate with a Bachelor’s Degree from O.U. in 2013. Matt was working as a junior chemist for Oklahoma P.E.T. Center, Deaconess Medical Center.

Matt was a very smart, funny, kind person who always had an encouraging word for others. He enjoyed music, from playing viola in high school orchestra, to playing in his rock band Downside Theory, to serving in church worship bands. He had a compassionate heart for others, going on mission trips to Haiti, India and Mexico. He was fluent in Spanish, planning to eventually use it to serve in Spanish speaking countries. He was a fan of the Denver Broncos, OKC Thunder, and St Louis Cardinals, and cherished his beloved French bulldog Thor. Matt loved Jesus and belongs to Him. We can rest in our unwavering faith that Matt is with Him now. Our time here is short, but eternity is forever and know that with our faith in Jesus, we will see Matt again. Matt would want you to remember that our life on earth is just to prepare us for an eternity with Jesus, and He is the only way to that eternity.

Matt is survived by his parents, Mary and Keith Buehler; his sister, Stephanie Buehler Peter; his brothers, David Paxton, Joshua Paxton and Chase Buehler all of Oklahoma City; and his grandparents, Mary Jane and Harold Buehler of Jefferson City, MO.

Memorials may be made to the City Rescue Mission, 800 W. California Ave, Oklahoma City OK 73106