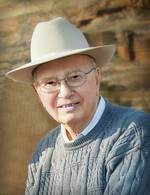 Oda Leon Wade was born October 16, 1926 in Newalla, Oklahoma to Morvan Gentry Wade
and Josie Lee (Monds) Wade. He passed away on September 11, 2019 in Oklahoma City following
a short illness. Leon had been a resident of the Norman Veterans Center since 2017.
At an early age, Leon’s family moved to Oklahoma City, where he attended Capitol Hill High
School. He was a proud member of the world-renowned Capitol Hill Acapella Choir.
On August 12, 1944, he married Mildred Wall and five months later joined the U.S. Marine
Corp. At the end of WWII, he was discharged and returned to OKC and began a 41-year career
with the Dolese Brothers Company. He was a dispatcher, then promoted to sales representative
and retired in 1988 after serving as a plant manager in Norman and Enid, OK. During this time,
their three children were born: Robert, Rebecca and Donna. After retirement Leon began a parttime
position with Hobby Lobby which provided a very rewarding opportunity to travel to many
states, accompanied by his wife Mildred.
Leon joined the Church of God in 1952 and was an active and faithful member his entire life,
serving in several capacities at state and local levels, heavily involved in church finances and
construction projects and teaching Sunday school for over 50 years. Leon gave generously of his
time and talents to his family, friends, church and community. He labeled himself a “jack of all
trades, master of none” but successfully built four homes for his family. He was involved in civic
and community service through the Rotary Club in Enid and the Lion’s Club in Blanchard.
He was preceded in death by his parents, brother Richard Wade, and his wife Rachel, and his
beloved granddaughter Beth Carrier. He is survived by his wife of 75 years, Mildred, son Robert
and wife Frances, daughter Becky and husband Jim Wyman and daughter Donna Wade. Other
survivors include grandchildren Amy Wade, Dustin Kusik, Brian Wade and Susan Van Hoose and
husband Scott, five great-grandchildren, Jenifer Young and husband Josh, Grant Gaines, Kamber
Carrier, Logan Schultz and great-great grandsons Parker and Keegan Young. One of his greatest
joys was rocking the babies and he got to rock them all!