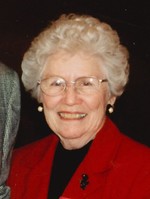 Mary Veronica Cook was born June 27, 1925 in Oklahoma City to James H. Cook and Beatrice (Givan) Cook. They lived in the near NE OKC area, and like much of society in those slower, less complicated times the immediate community was close-knit - almost everyone knew everyone else in the few square blocks that could easily be navigated on foot.

Veronica was on the "cradle roll" at Northeast Baptist Church - where she was first introduced to Tommy Lee Deplois. She married Tom on June 8, 1945. She gave Tommy a Valentine card, we still have, when they were four years old. They have been married for 74 years, but have been sweethearts for 90.

Veronica and Tom made their first home during WWII in Guam, but started their family in OKC soon after. Debbie was born in 1950. She suffered from severe birth trauma and was incapacitated all her life. It was very difficult for them to leave Debbie in the care of others, though they visited often. Nancy was born in 1954 and has been their delight as well as their primary care support in recent years, but more importantly she gave them 3 grandchildren and 5 great-grandchildren.

Veronica was a kindergarten teacher for many years (perfect since she was barely taller than a 5 year-old) , a great cook (her first love was home economics) and a voracious reader.

Veronica passed away after a brief hospital stay on September 26, 2019 - she was 94 years old. She is survived by her husband Tom; daughter Nancy and husband Tony Gardner, all of Norman, OK; grandson Joel Gardner, his wife Courtney and children Brenley and Noah of Blanchard, OK; granddaughter Angi Gardner of Oklahoma City; and grandson Joshua Gardner, his wife Andrea and children Lauraline, Evie and Maia Pearl of Ancaster, Ontario Canada. Veronica is also survived by her brother Jack Cook and wife Jeannie of Piedmont, OK. She was preceded to heaven by her father and mother and daughter Debbie.