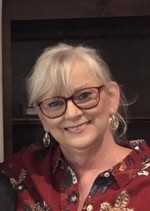 Services to celebrate her life will be held at 10:00 AM Monday, September 30, 2019 at Southern Hills Baptist Church (8601 South Penn.). In lieu of flowers friends may make donations to the ASPCA.


Debbie Louise Laird passed away in her sleep the morning of September 27, 2019.
Debbie was born in Ponca City, Oklahoma on September 9, 1954 to Paul & Shirley Hunt. She lived in Burbank, Oklahoma until she was 14 years old, when her family moved to Oklahoma City. Debbie graduated from Putnam City (original) High School. Debbie and Jeff had been married for nearly 30 years. They loved each other dearly, and were true soulmates who shared life together. Debbie loved her family and her friends. She didn’t have children of her own, so her puppies were her children. Any dog lucky enough to live in Debbie’s home, lived a life of royalty. She loved all animals. Her favorite bird was a cardinal who sat in a tree in the backyard and would talk to Debbie while she was sitting on the patio. Debbie and Jeff attended OU football and basketball games home and away, including bowl games until her health made it too difficult to continue. One of her favorite things was attending concerts of old “rock and rollers”. She went either with Jeff or with one of her close friends. The last concert she and Jeff attended together was Bob Seger. Debbie was preceded in death by her mother and father Paul & Shirley and her beloved grandma Jesse Darst. She is survived by her husband of nearly 30 years Jeff Laird; sisters: Deana Rowley, Dana and her husband Larry Crawford. Stepchildren Alan Laird and his wife Angie; Greg Laird and his wife Brandy; Sisters-in-law: Julie McShane; Mary and husband Dick Brown; Grandchildren: Leo, Alexander, Parker, Kate, and Ella; Nieces: Stacy, Jamie, Kelli, and Lenore; three grand nephews; four grand nieces, as well as many family members & close friends.