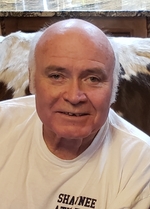 Charles Henry Clark passed away on September 28, 2019 at the age of 68 with his family close by him. He was born to Johnny Forrest Franklin and Willie Lozetta (Ayers) Clark on December 18, 1950 in Bennington, Oklahoma. After high school Charles joined the US Air Force and honorably served his country. He earned his living as a Machinist for many years. His hobbies included collecting and tinkering on classic cars, fishing, car shows, and swap meets. Charles loved God, his family, and he loved to help others in need. He will be forever loved and missed.