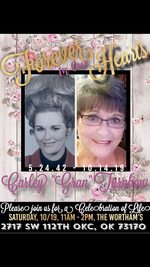 Click on Carley's picture for Celebration of Life details.

Carley Mae Turnbow (Mundt) went to be with our Heavenly Father on October 14, 2019 at 4:30pm. Carley is now pain free and happily reunited with the love of her life, Billy Joe Turnbow. Carley was born in Iowa Park, Texas to Arthur R and Pearlie Mae (Armistead) Mundt on May 24th, 1942. Carley married Billy J Turnbow on February 26, 1965 and unto this union were born Camie Lynn and Cassandra Lea. Carley’s love of sports began when she met Bill and never ended. She loved her time in Stillwater as an OSU coach’s wife. Carley would sew a new outfit the night before every game to wear to support her Cowboys. She was a big fan of OSU, Texas Tech, The Texas Longhorns and in more recent years The Oklahoma Thunder. But she would watch any sport that was on TV at the time. There were some times that you would have thought that the roof was collapsing in the room she was watching sports in, with all the yelling and screaming she would do at the TV! Bill moved the family to South Oklahoma City in 1979. Carley was a stay at home mom until she began her career, of 20+ years, at Moore Public Schools in the Administration Building where she cultivated many lifelong friendships. Prior to her work at MPS, Carley and her good friend Candy Hines opened a seasonal Christmas store called The Christmas Cottage, where they sold their hand painted items and crafts. Carley loved to paint and decorate. There was not one inch of the Turnbow house that wasn’t covered in Christmas cheer at Christmas time. Carley was a member of SHBC for over 20 years and taught Kindergarten Sunday School during that time. Carley loved the Lord and loved to share that with everyone, especially the children.
Carley never met a stranger. She greeted everyone with a smile and always made everyone feel welcome. Carley spent her free time with friends and family. Her children and grandchildren were what brought her joy in life. In September of 2007, Carley’s world was turned upside down as her husband Bill unexpectedly passed away. Things were never the same for Carley but with the love and support of her daughters and grandchildren, she was able to find peace. Carleys health declined rapidly in the past year. The family would personally like to thank Meadowlake Estates and Frontier Hospice for making every step a little easier for Carley. She never lost that “signature” smile until the very end. The family would also personally thank Carley’s best friend of 20 plus years, Sharon Corcoran, who take such good and loving care of Carley. Carely is survived by her daughters, Camie Lynn Maxey (Turnbow) and Cassandra Lea Turnbow, granddaughters, Taylor Maelynn Turnbow (28) and Kaylee Lynn Maxey (21) and grandson, Karsten Lee Maxey (19). Carley is preceded in death by her parents and her husband Bill. Carley is also survived by her brothers Paul Ray Mundt and Donald Richard Mundt and sister Hazel Marie Hughes (Mundt) and special sister in law Marie Mundt. As well as many friends and family including her “bonus” family, The Turnbows