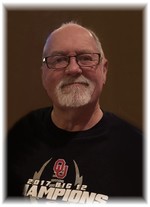 Butch Bassett, 68, of Oklahoma City, OK, passed away October 27, 2019 at home surrounded by family. Butch was born April 27, 1951 to Robert and Betty Bassett in Oklahoma City, OK. He married Debi Nunn on June 20, 1975 and from their union they had 3 children. Butch enjoyed cooking out on the grill, smoking meat and entertaining friends and family. He was an avid sports fan, who loved watching OU football games. Butch also enjoyed hunting and fishing trips, camping and taking his boat out on the lake. He could always be found tinkering around the garage and being an all-around handyman. He had an appreciation for jazz music and could be found unwinding with a good movie. Most of all, Butch was a family man. He was a loving husband, father and grandfather. His grandbabies brought him so much joy and happiness. He will be greatly missed by all who knew him.

He was preceded in death by his:
Parents;