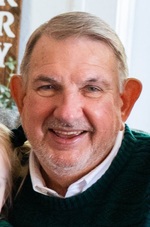 Joe Howard Hill was born February 12, 1952 in Shawnee, OK the son of Joe Frank and Dorothy Ann (Lockhart) Hill. He completed this life on October 31 in Oklahoma City at the age of 67.

Joe was raised in Shawnee where he graduated from Shawnee High School in 1970. He married Lynn Fisher November 8, 1980 in Shawnee, OK after reconnecting at their 10-year high school reunion.

Joe graduated from Shawnee High School in 1970 and Central State University in 1997. He joined Southwestern Bell (now AT&T) in 1972 as the first male phone operator at Southwestern Bell in Shawnee. He went onto several other positions before retiring in early 2019 after working his entire career at the company.

His greatest joy was his family. He is survived by his wife, Lynn; his daughter, Emily Hill of OKC; his son, Adam Hill, his daughter-in-law, Cari Hill and his adoring grandchildren, Crosby, Annistyn, and Abbott Hill of St. Louis, MO; his brother, Rick Hill and his wife, Jani of OKC; his sister, Lois Maldonado and her husband Henry of Shawnee; and his cousin Mike Clement of Shawnee, OK. He is also survived by a number of special extended family members including his mother-in-law, nephews, nieces, sister and brother in-laws and friends.

A memorial service will be held Tuesday, November 5 at 1:30 at Church of the Servant.