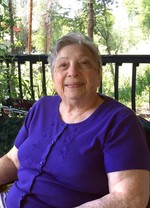 Janet Elizabeth Zarate, 83, of Oklahoma City, passed away on Tuesday. Janet was born in Banbury, England to Alfred and Irene (Salt) Crofts.

Janet married the love of her life Dave Zarate and they enjoyed traveling. She worked at American Fidelity in OKC for many years. Janet loved to read and enjoyed knitting. She will be deeply missed.

Janet is preceded in death by her
parents
brother, David Salt.

She is survived by her
daughter, Christine H. Zarate-Jones;
grandson, Bobby Jones and his wife, Liana;
and numerous other loving family and friends.