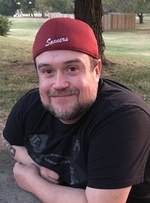 Jerry Lee Moomey was born September 7th, 1978 in OKC to Pete Moomey and Jana Raper. Jerry attended West Moore High School and graduated with honors in Music. He was the drummer in his high school band and Captain of his wrestling team where he excelled in both. Upon graduation Jerry’s hard work and dedication paid off as he was awarded a band scholarship. However, Jerry had a different calling by joining the United States Army shortly after graduation. Through his dedication, hard work, and determination, Jerry was elected and honored in joining and training with an elite group, the Rangers, of the United States Army. Jerry was awarded for being top of his company in training and was a very proud Veteran of the Armed Forces. After exiting active duty in the Army, he remained a member of the US Army Reserves, while attending East Central University in Ada working toward a teaching degree. Unfortunately, due to his health he was unable to complete his Bachelor’s degree in Education. Additionally, Jerry Lee was a diehard OU Fan! He loved Sooner Football and tried to never miss a game! He was extremely proud of his son, Skyler, who is currently attending OU. Jerry never failed to tell everyone how proud he was of both of his children! Jerry has always said his greatest achievements in life were Jalyn & Skyler, because they were so precious to him.
Jerry was a loving and spiritual person with a strong faith in the Lord. As he continued his life, Jerry Lee loved to go fishing & boating and loved family cookouts where everyone came together. Above all, he loved his children and his family; unfortunately, his life ended too soon and we will miss his love and companionship.

Jerry Lee Moomey, Father, Son, Brother, Cousin
and Friend. You will be greatly missed in this life. We will see you again soon.