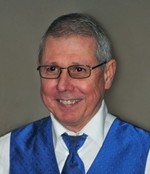 Gary Stallings, 66, passed away Sunday November 24, 2019 in Oklahoma City. Gary was born in Oklahoma City to David Lee Stallings and Joyce Moorehead Davis. Gary graduated from Crooked Oak High School in 1972. He married Carol Erlenmaier on January 18, 1974 in Oklahoma City and they were blessed with two daughters, Angela and Michelle. He worked hard to support his family. He was employed at Johnson Controls for 41 years and retired in 2015. Gary will be deeply missed by his family.