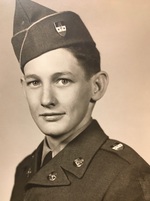 J W Scott Barry was born June 8, 1932 in Harmon, Oklahoma the son of Louis Clifton and Sybil Minnie (Clary) Barry. He completed this life at his home on Tuesday, November 26, 2019 at the age of 87.

Scott served his country in the U.S. Army during the Korean Conflict. He worked for many years for General Motors where he retired as Deputy Director for GMC Truck and Bus.

Scott married Vonda Pearl Martin on July 31, 1954. She preceded him in death on March 29, 1997 after being married 42 years. He was also preceded in death by his parents and his brother, Louis C. Barry, Jr.

He is survived by his daughter, Amanda Barry Martin and her husband Johnny of Merit, TX; his sons, Martin Barry of Cashion, OK, Joe Barry and his wife Cindy of Oklahoma City and Jerry Barry and his wife Shelley of Guthrie, OK; his sisters, Jo Baggett (Harold) and Peggy Evans (Mrs. Bill) both of Oklahoma City; his brother, Vaughn Barry and his wife Lela of Moore, OK; his grandchildren, Joshua, Andrew, William, Holly, Heather, Lucas, Melissa, Kaitlyn, Kayleigh and Lindsey; his great grandchildren, Cashyl, Easton, Tristan, Kinnick, Stella and Elias; his longtime companion, Lillian Watkins.

Funeral services will be 11:00 AM , Monday, December 2nd , 2019 in the Vondel Smith Mortuary North Chapel, 13125 N. MacArthur Blvd. with interment with military honors will follow in Chapel Hill cemetery.

Memorials may be made to Shriners Hospital for Children, 2900 Rocky Point Drive, Tampa, Florida 33607. https://donate.lovetotherescue.org/give/119312/?utm_source=shcmain#!/donation/checkout