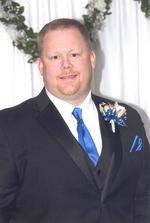 On Monday, December 9, 2019, Sean William Trent, doting husband, father and loving son passed away at home at the age of 47. Sean was born on November 10, 1972 in Norman, Oklahoma to Bobby and Shirley Trent. On November 15, 2014 he married Michelle Garrison. They were blessed with a daughter, Devyn Lynn Trent on November 17, 2015. A graduate of the University of Central Oklahoma with a Bachelor’s of Science degree in Elementary Education in 1999 and a Master’s of Education degree in 2005. Sean worked for the Mid-Del School System for 20 years and advanced from teacher to vice principal, to principal and then to an executive director in the administration office. During his professional career he received several awards such as “Above and Beyond the call of duty in 2000-2001”; “Teacher of the Year from Parkview Elementary in 2003-2004” and Kiwanis President’s award for dedicated service in 2017. Sean was deeply committed to education, often remarking that what was right for the student was the most important thing. Among Sean’s many interests was his love of cars, which he shared with his wife, Michelle, and his love of sports. He and his brother-in-law, Jeff Jameson, coached his nephew’s football and baseball teams over two seasons. At a very early age, Sean adopted OU football as his team and was not above giving fans of other teams a hard time, especially when OU won. As a teenager, Sean was baptized into the Lord’s church. Since 2013, the N.W. 21st Street church of Christ was Sean and Michelle’s home congregation. During this time as his health permitted, he was involved in leading songs and prayers; as well as delivering lessons to give encouragement and support in living the Christian life. Sean was a great example to all that knew him.